The Eindblazen CTF Teaser has just started. I will be attempting a few of the challenges over the course of today. If anyone wants to help out, head over to the Sec.SE CTF team chat room.

What at first glance seemed to be a simple reversing challenge had a sting in its tail which led to me spending far more time than I should have figuring it out.

Running the executable yields a dice game interface, where the user presses return to throw the dice. The value rolled is randomly generated 1-6. To win the game, you have to roll 5 specific numbers in order; 3-1-3-3-7, if at any point you throw an incorrect number the program terminates.

If your first thought at this stage, like mine, is that this space is easily brute forced - why not just let the random rolls hit it eventually - it's worth noting that we might be waiting a while to roll a 7.

So the first stage was just a case of firing up Immunity and pausing the execution at the first dice roll. Stepping through the program quite quickly showed the call to rand() that was being used to generate the rolls.

A carefully placed breakpoint at the moment the rand() result was loaded into eax meant that I could replace it with whatever value I wanted.

Unfortunately, due to what I thought at the time was loop-unrolling, the 5 calls to rand() appear separately, so I had to repeat the process above for each roll offset.

So now we can run the program, and at each dice roll edit the result so that we get 3-1-3-3-7. Too easy, right? Unfortunately this is not enough. Despite rolling the required numbers, the program terminates with a message

And this is where I started wasting time. I assumed that I had not 'synthesized' the dice rolls in exactly the way that was required. I was led to this assumption by the fact that on the final roll my prompt always drew the dice-roll for 3, even though the text underneath read that I had rolled a 7.

The first thing I did was track down the branch that was taking me to the 'something wrong' message, and patched it to reverse its decision.

This resulted in me getting the success message, but a garbled flag. So the 'something wrong' message was right - somehow the flag generation hadn't happened as it should.

Anyway, much head-scratching later, I revisited something I had noticed earlier while browsing the overview in IDA. There were lots of calls to time(). This program was making use of system time somehow. 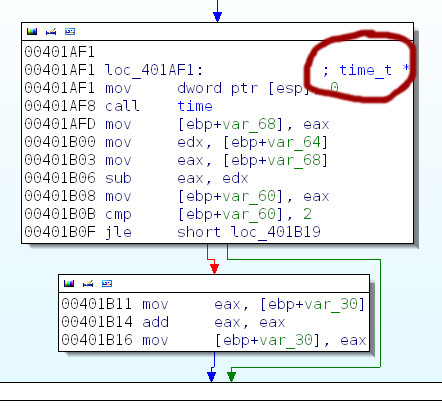 Essentially, if the time taken between any two consecutive dice rolls was ever greater than 2 seconds, a certain code fragment was executed. This code fragment stomped on the flag generation address, garbling it.

There was one last, glaringly obvious thing I missed:

Again, patching this branch to reverse its decision in Immunity and the flag was presented, ungarbled.

The Sec.SE team did a poor but oddly appropriate showing at #69.

We get two encrypted files, a decryption program, and the password for one of the files. The plaintext for the file we can decrypt is formatted like an email, which suggests that the other may be too. It's likely that the second file begins with From: Vlugge Japie <vl.japie@yahoo.com> or with From: Baron van Neemweggen <b.neemweggen@zmail.com>.

The encryption algorithm is a stream cipher. The keystream is derived from the password as follows:

Oh, look: each chunk of keystream only depends on the previous chunk! So if we can guess one chunk, we can decrypt the message starting at that chunk. Earlier we saw that we had a good guess for the first chunk, so let's plug it in. We can reuse the supplied Python code, just remove the initial key generation step from the crypt function.