Security.SE (security.stackexchange.com) is apparently blocked by Smoothwall, a content filtering product. I discovered this while trying to access the Security.SE site while traveling and connected to my hotel's Internet connection. Apparently, Smoothwall has listed Security.SE in its blacklist, claiming that Security.SE is a hacking tool -- which is pretty silly.

Is there anything we can do about this, to get Security.SE off Smoothwall's blacklist?

Otherwise, perhaps other users of Security.SE might want to submit a support request to Smoothwall to ask them to remove us from their block list. Candidate text:

You have blocked security.stackexchange.com, listing it as a site for hacking tools. This is not accurate; it is a site for computer security professionals, not a hacking site. Please remove this site from the Smoothwall blacklist.

The contact information listed on their site is to email support@smoothwall.net or to submit a request via the web. They also list their phone numbers on their contact page. Perhaps if they receive a professional message from a StackExchange employee, or from a happy user of Security.SE, they might move us off their blocklist.

Here's a screenshot of the block message I saw, when I tried to access security.stackexchange.com from the hotel wireless network: 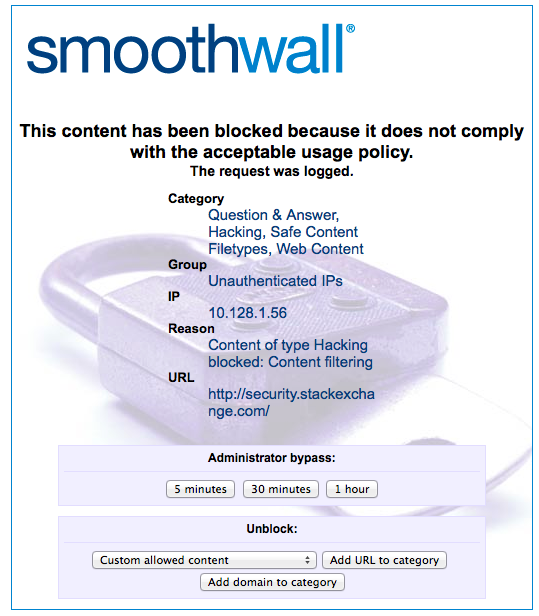 The block has been fixed - you won't (as a non-customer) be able to use the support portal, but someone did contact us through the website contact form, and that's how we were able to spot and fix the issue.

@Adnan, if you could private message me if you can remember who you talked to, I will see to it that they get re-trained! Can only apologise that you were given the run-around here. I'll also see about getting the message out to more people about responding to end-browser feedback. If something's miscategorized we absolutely do want to fix it!

I've called Smoothwall's support people. Apparently, there's pretty much nothing we, end users, can do about this. The only way for them to look into this is if the complaint came from one their customers (hotels, schools, etc.)

Since the support people were of no help, I tried to contact the sales department and asked about their policy regarding false-positives. I was given the 10-minute gig on how awesome the product is and how happy I will be once I use it. I explained to the sales rep what I exactly wanted, and suddenly he hung up on me.

Basically, you have a shot at helping with this. If you have some free 5 minutes here or there, maybe you could talk to the hotel people since they're a customer of Smoothwall's.

Until we fix this, I discovered a simple workaround to bypass Smoothwall's blocklist, in this instance. Try visiting the HTTPS version of the site: https://security.stackexchange.com/

I'm listing this workaround if there is anyone else who is trying to access Security.SE from their hotel network and is getting blocked. However, this is really a kludge, and it shouldn't be necessary. The right answer is to persuade Smoothwall to remove us from their blocklist, or convince people to stop using crummy blocking software.

Not the answer you're looking for? Browse other questions tagged support .