How much spam traffic does this site get?

This is just idle curiosity on my part after seeing another pair of spammers lurch in here trying to get links back to their site (and getting removed within minutes). I'm guessing they come here of all places because there's a lot of traffic to Stack Exchange, and that there's a lot more than a pair of fresh accounts offering face creams. So, how much spam traffic does Sec.Se get every month?

I'll expand on the comments by S.L. Barth and Ferrybig. Here is the list of 100 most recent spam posts (with a few false positives mixed in), as reported by SmokeDetector bot. According to it, the average is about 5 spam posts per day: more during the business days, fewer during the weekend. (There may have been some spam that SmokeDetector failed to report.)

Metasmoke, the web dashboard for SmokeDetector, shows the distribution of spam reports by site: 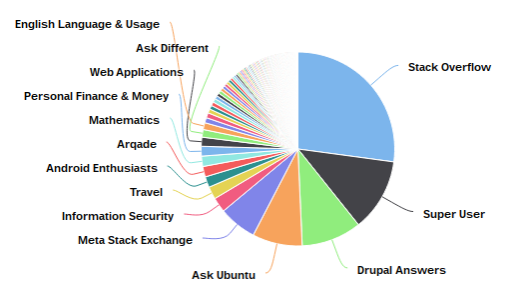 There are Big Five sites with lion's share of spam: SO, SU, Drupal, AU, and Meta. After that, there is everybody else - and Information Security is the top of that group.

The above only reflects the traffic that succeeded in posting. A lot more spam gets blocked, but we don't have a count of those attempts; I don't think even moderators do. See Could moderators be given access to how much spam their site(s) see?

Not the answer you're looking for? Browse other questions tagged discussion statistics .

1
Does the badge requirements make sense for a security site?
12
Why did this question get upvotes?
0
Debunking "Debunking SQRL" - Blog article is misleading
14
How can this site stop "Why do 'X' still exist?" questions?
1
New to the site, how does reputation work?
1
Is this question SPAM?
19
Spam, spam, [spammer] and [spam]