SwampCTF is a Jeopardy-style CTF and lasts 48 hours. Challenges are from a range of categories like Cryptography, Forensics, Reverse Engineering, Binary Exploitation, etc.

You can find additional details on the CTFtime event page. 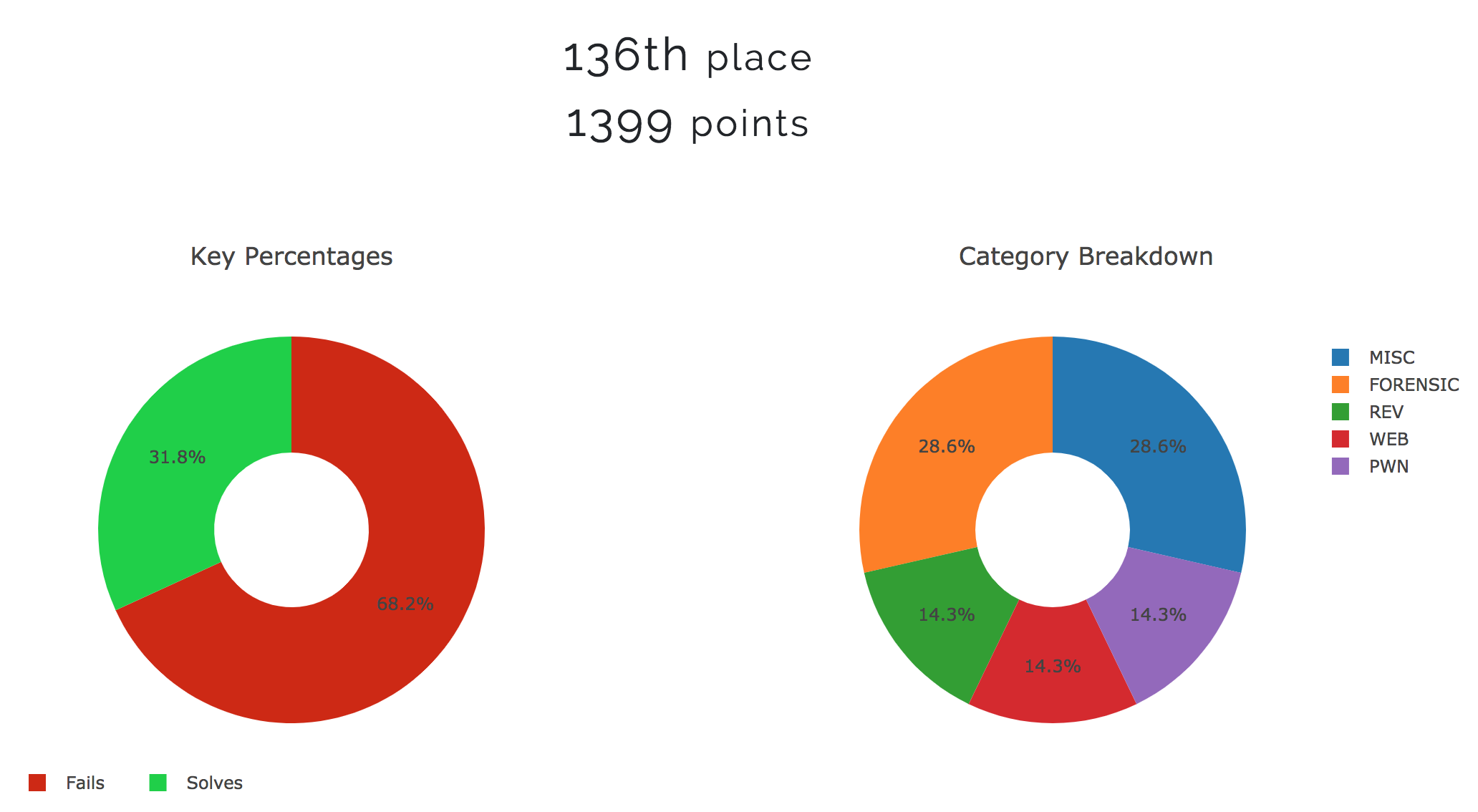 Has it been days? Weeks? You can't remember how long you've been standing at the door to the vault. You can't remember the last time you slept or ate, or had a drop of water, for that matter. But all of that is insignificant, in the presence of the untold fortunes that must lie just beyond the threshold.

But the door. It won't budge. It says it will answer only to the DUNGEON_MASTER. Have you not shown your worth? But more than that, It demands to know your secrets.

But with each failed attempt you start to notice more and more that there's something peculiar about the way the door responds to you.

NOTE: DO NOT USE AUTOMATED TOOLS

We are presented with a login screen and since this is a web challenge, I tend to use my favourite http proxy: Burp. This allows me to view all traffic received/sent from the webserver. Sending foobar as username and bazqux as password, the UI pops up an alert stating "invalid credentials". Burp however intercepted the following response:

There's some JavaScript magic in the webpage that of course handles this. The website and the challenge description both state that only the DUNGEON_MASTER may enter the vault, let's try that as username: 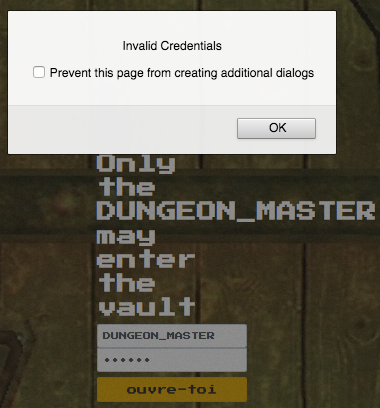 Wrong credentials again but the response was different this time:

The passwords are hashed but showing the expected hash in the response is definitely not right. Turns out that the hashing algorithm is SHA256. Next step is to figure out the original value of the hash. Since hashing algorithms are one way, there's no way to turn back unless we use bruteforce, rainbow tables or just google for websites with huge databases that have done this before. Some sites didn't contain the hash but the following did: https://crackstation.net/ . The original value for hash 40f5d109272941b79fdf078a0e41477227a9b4047ca068fff6566104302169ce is smaug123. 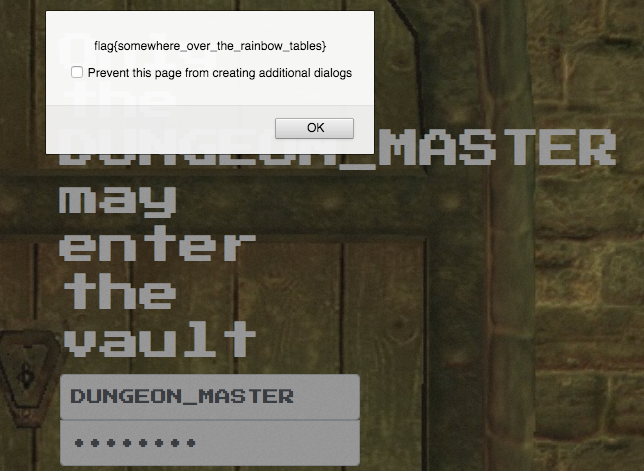 An army of orcs was spotted not too far from town. We were listening in on some of their communications but we have not been able to find anything containing their battle plans. Maybe they are disguising the messages some how..

We were given a pcap file and we had to somehow find hidden messages. The statistics tools of wireshark can give some great general insight of the traffic. I usually start from there and view the "Conversations", "Endpoints" and if there's HTTP traffic, I view the requests. I also try to scroll through the packets very fast and try to see if there's any anomaly: 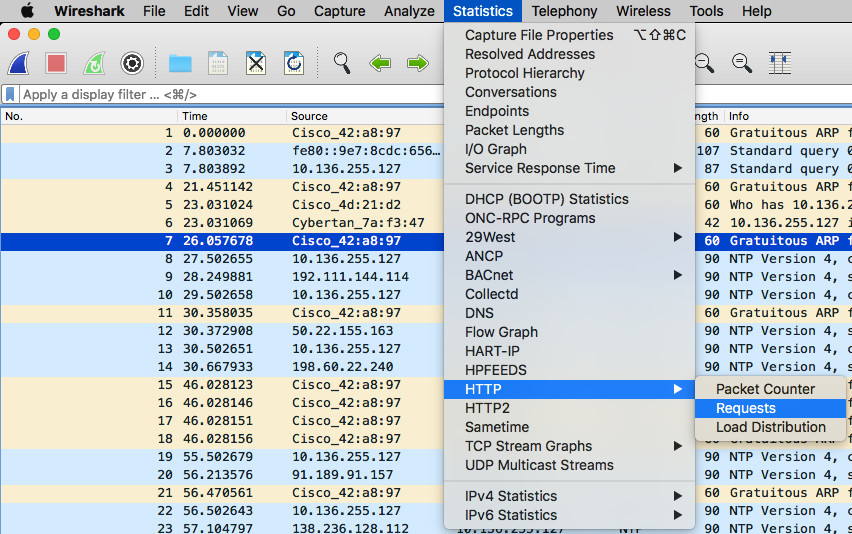 While scrolling through the packets, there were a lot of HTTP traffic. So I viewed the HTTP requests under Statistics: 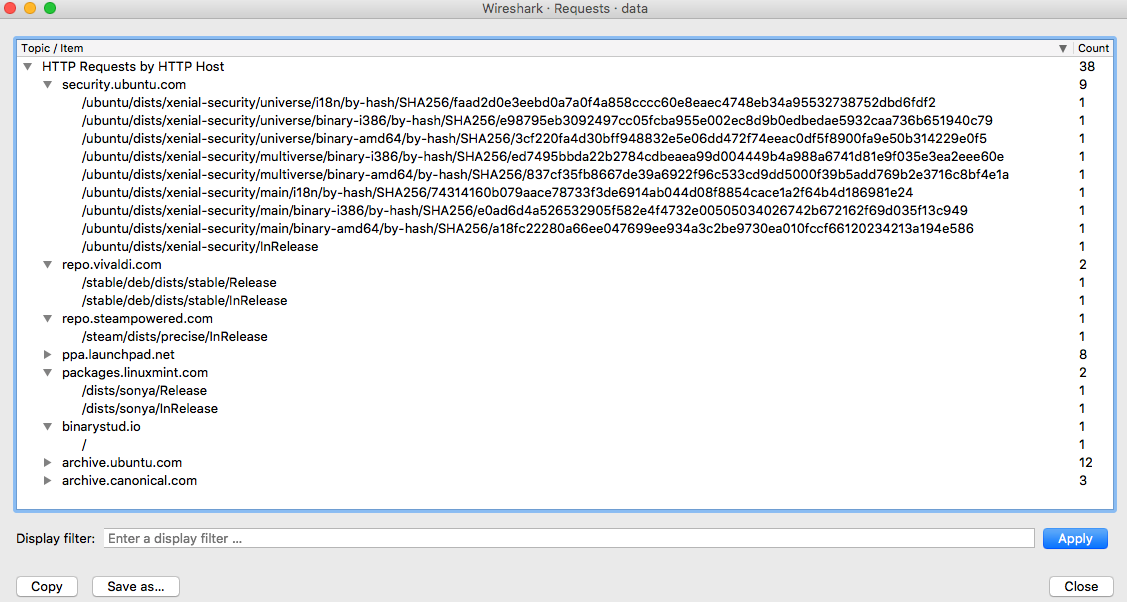 Some update/ubuntu/steam related stuff, not very interesting. Moving on to the end of the captured packets, I noticed a stream of (malformed?) ICMP packets: 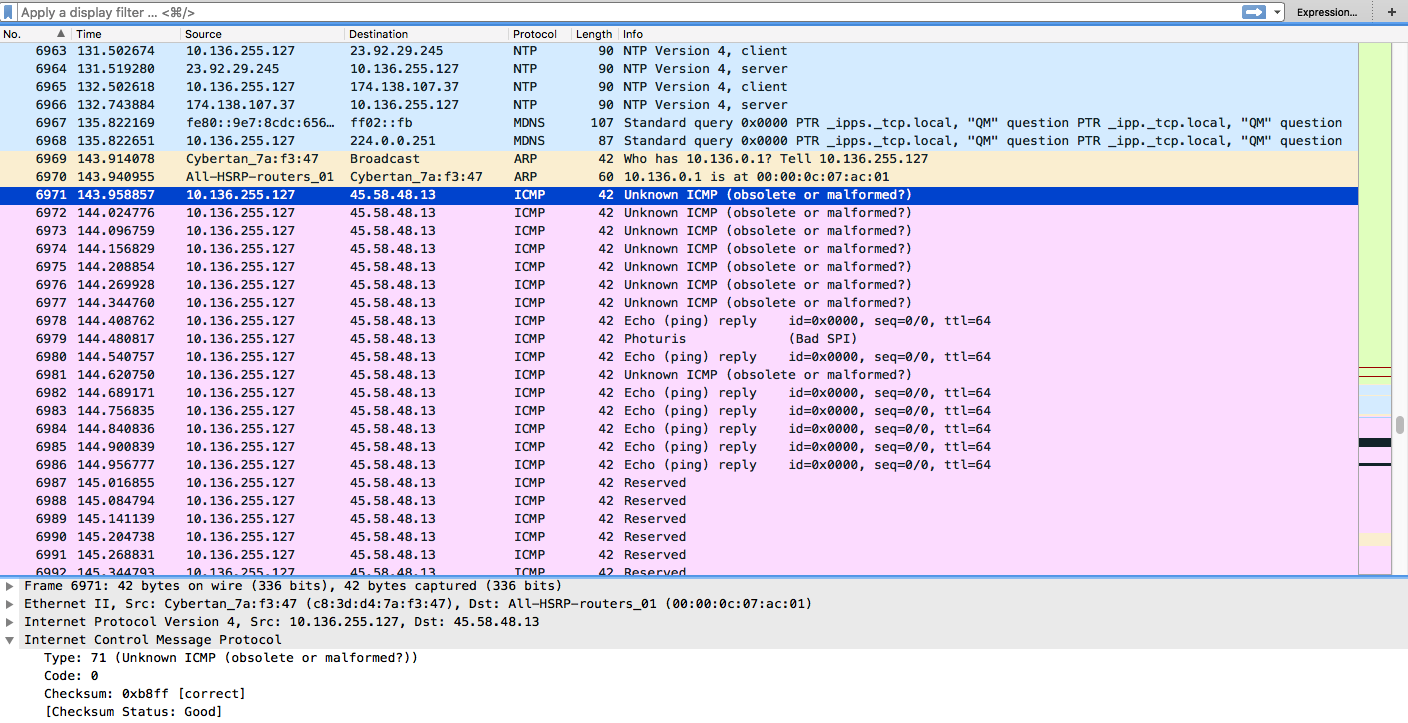 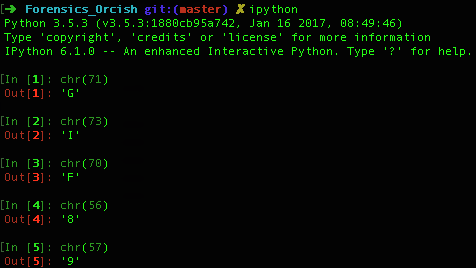 There's probably a GIF file hidden in the ICMP packets! Since I didn't want to extract all bytes by hand I wrote a small script with pyshark:

Unfortunately the GIF file was corrupt and couldn't view it, but it contained lol nice job?! 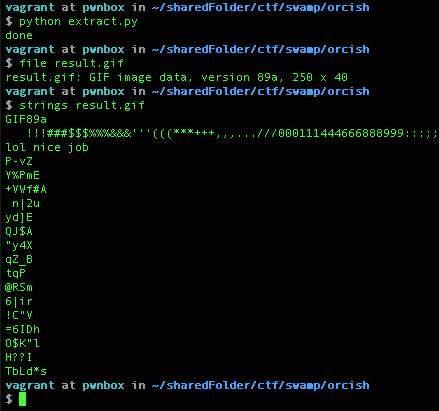 This time, the GIF file was not corrupt!

That sure was a wild night at the old tavern. Good thing someone was able to draw the scene for us to remember. But the more I look at the picture, the more it seems that something isn't quite right... 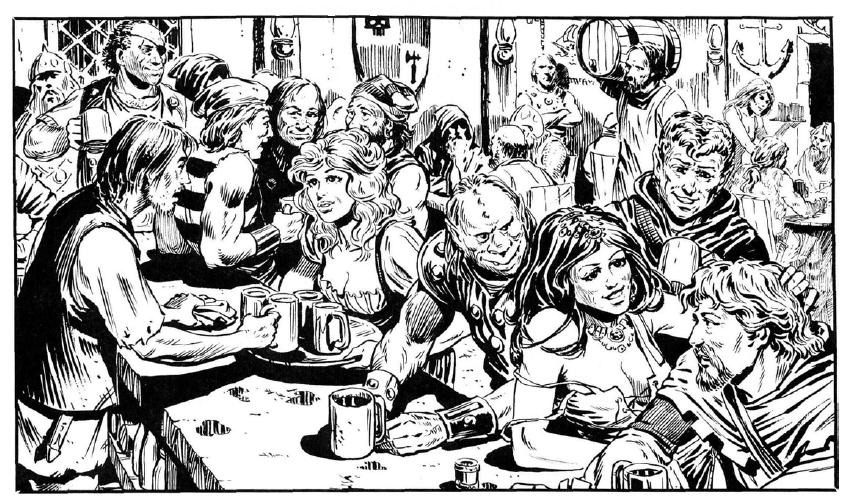 Our team member @Tom K. ran all kinds of tools against the image (foremost, binwalk, stegsolve etc.) and nothing came up. The description kind of hinted to look at the picture, so what else to do than use GIMP and try to mess with the colors? 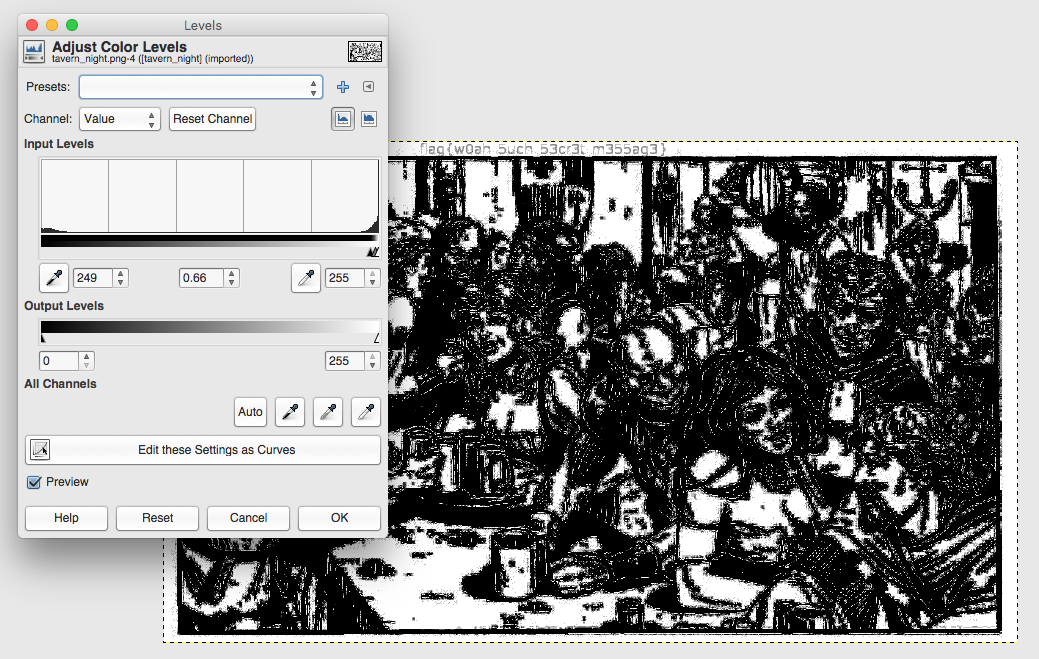 The flag could be read at the top of the image.

For one such as yourself, apprentice to the arts of time manipulation, you must pass this first trial with a dreadful creature.

We were given an unstripped 32-bit ELF binary:

First thing to know when pwning a binary is to check the security measures enabled:

So the most important thing to keep in mind is that the NX bit is set which stands for No-eXecutable. Let's open the binary in Binary Ninja. The main function is quite straightforward, it calls the doBattle() function, after that it prints some text: 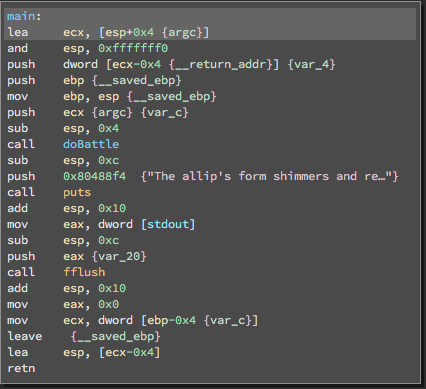 I guess the doBattle() is the function we're supposed to pwn. However, it is worth noticing another interesting function in the functions list called slayTheBeast(): 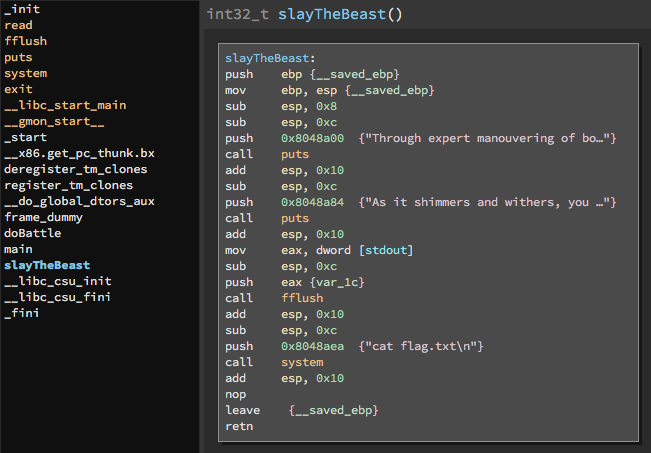 This function basically cats the flag for us. Which means we probably need to somehow jump to this function. Let's examine the doBattle() function: 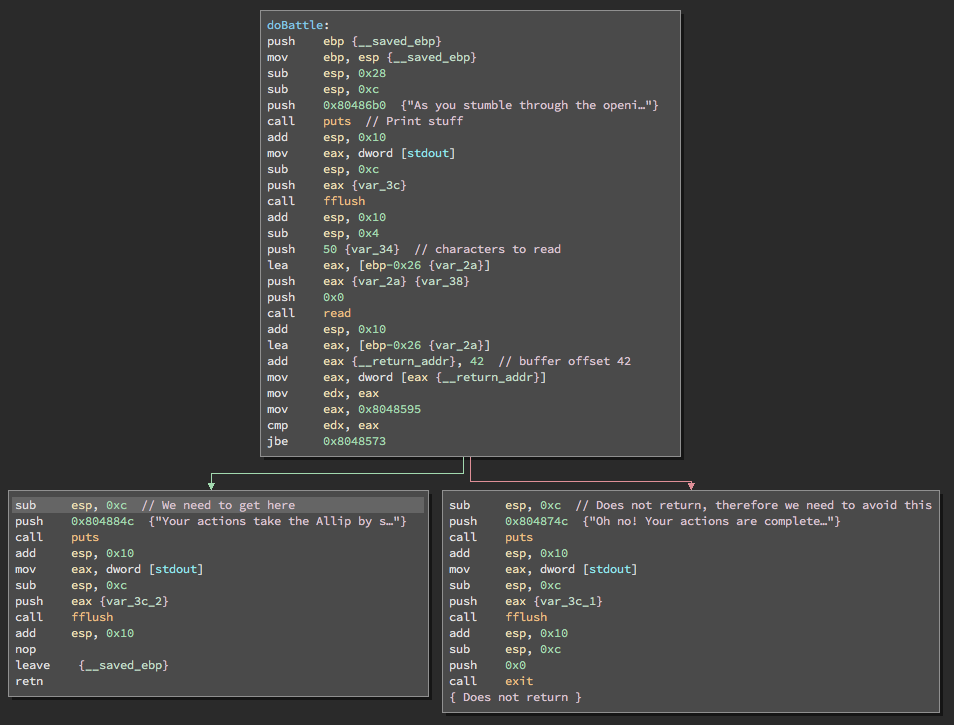 The function prints some text, then reads a max of 50 characters. A weird thing to notice is that it performs a check for the value at offset 42 from the read characters and compares it with 0x08048595. This corresponds to the end of the doBattle() function:

After playing with the binary with gdb, it becomes clear that the doBattle() function suffers from a buffer overflow vulnerability. The offset to overwrite EIP is 42. There was a problem however when using the vanilla "payload testing" method: A * 42 + BBBB.

After stepping a bit, it seems we're on the right path: 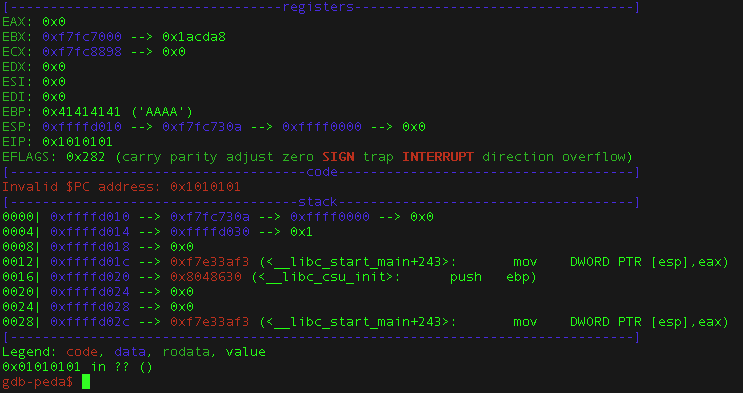 Now we need to jump to slayTheBeast() function, however this function resides at address 0x080485db. The previously mentioned check will prevent us from jumping to it directly since the address to jump to needs to be smaller than 0x08048595. Let's search for some ROP gadgets using peda:

The ret at 0x0804835a will do the job since it's smaller than 0x08048595 and it will allow us to return/jump to the slayTheBeast() function which will follow right after it. Our final payload will look like this: A * 42 + ret + slayTheBeast. In practice, this simple Python script will do the job:

It's important when using cat to keep stdin open with -:

You are a member of the dragon slayer's guild within your town. Word comes to the guild of a dragon seen in a nearby mountain range. You and your party decide to go out and slay the beast. There is surely great wealth and glory to be obtained. But be careful, dragons can be tricky creatures to deal with.

I tried to run it but got:

Spent a few minutes trying to fix this error and then thought "Since it's a 32-bit binary, let's drop it in retdec.com".

Retdec is an online decompilation service, it currently only supports 32-bit binaries. The decompilation is not perfect (a pretty hard problem) but it's enough for us. Here's an excerpt of the C decompiled file:

We have foo[1-15] functions and a main function. The foo functions return certain values. If we convert these integers to their respective ASCII values, we get the flag.

The above approach is a bit lame, so let's solve this in another way with radare2. r2 is a reverse engineering framework, it can be automated with r2pipe. So I wrote the following script in order to extract the flag from the functions: 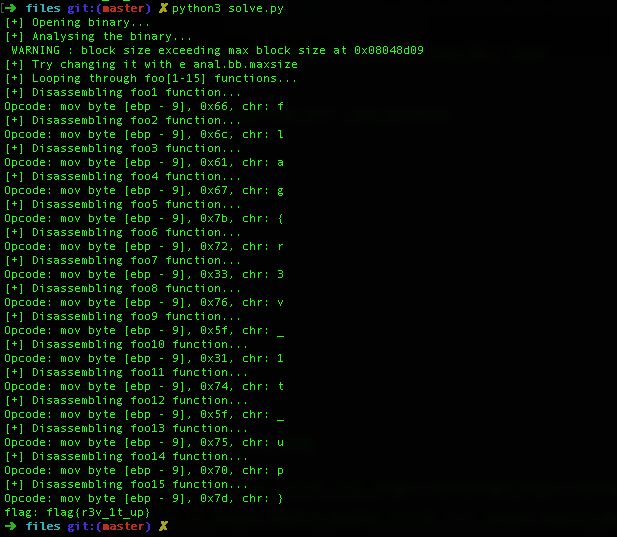 Not the answer you're looking for? Browse other questions tagged discussion ctf write-up .